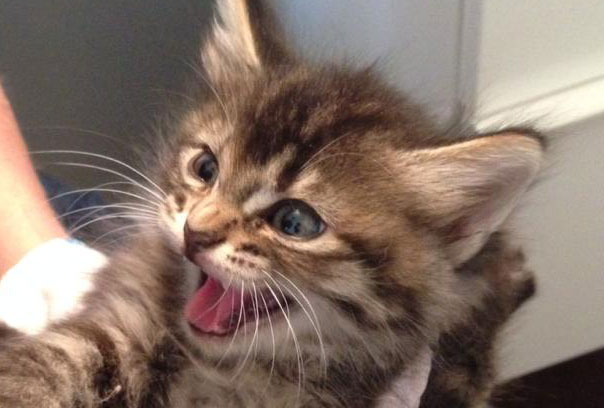 Grendel is a tiny little monster of a kitten. He’s all teeth and claws and fire.

As described in the Old English epic Beowulf, Grendel was quite a beast:

Every nail, claw-scale and spur, every spike
and welt on the hand of that heathen brute
was like barbed steel. Everybody said
there was no honed iron hard enough
to pierce him through, no time proofed blade
that could cut his brutal blood caked claw

As soon as the name occurred to me, it stuck. And all indications are that my Grendel will do his best to live up to his namesake.

For now, though, he’s roughly 5 or 6 weeks old. As I posted yesterday, he and his siblings were rescued from a kitten-unfriendly location behind a retail store. I hadn’t really intended to adopt a new kitty so soon after Seamus passed, but these things have a way of happening to you without any planning. My friend really needed homes for the babies quickly, and there was a vacant spot in my household, so one plus one equals a new kitten.

He’s already making himself at home on my shoulder as I type, and mostly he’s being pretty sweet with me, though there was some hissing when I discovered his new lair hidden among the books on my bookshelf. He’s met the other animals in the household and made sure they all knew how ferocious and dangerous he is. There’s some suspicion he may be part Maine Coon since that’s what his mother looked like. That may mean he’ll be a big guy one day. A big dragon of a kitty. 🙂

For now, though, he’s just settling in to a strange place with lots of foreign smells, and getting ready for his first kitten vet visit tomorrow.