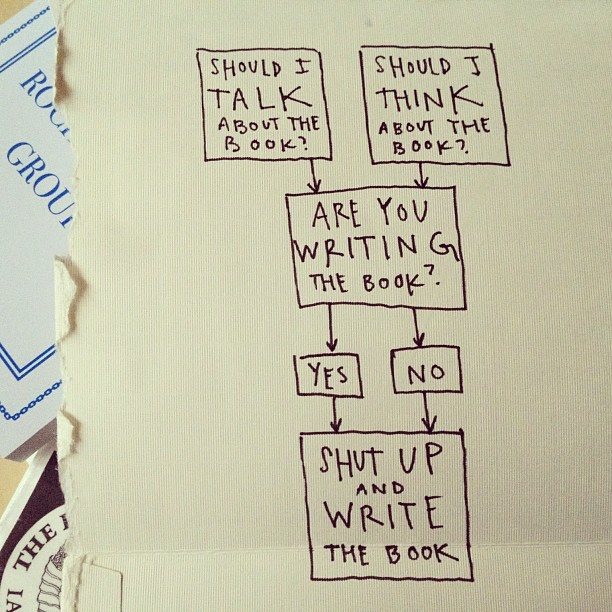 Despite all odds, I have managed to write every single day this month. Even when I ended up in the ER, through the death of a pet and the adoption of a new one, and the last minute frantic planning of WordCamp Austin, I have found time to put words down on virtual paper, and to stay at or above “par” almost every day.

The diagonal line represented “par”, or the total number of words I needed to log in order to stay on track to reach 50K by April 30. Each bar is the total wordcount to date, and whether I was above or below par by that day.

As you can see, I’ve cut it close. When I did NaNoWriMo last November, even with traveling out of the country for a week I made much better progress:

I attribute the differences to a few things. Of course it goes without saying that the chaotic life I’ve led this month has hurt me. Beyond that, though, I think it was easier to write the first time because it was my first time doing NaNo; it was a brand new concept and I was discovering things and inventing characters constantly, which kept me excited; and perhaps most of all, there was an active community of fellow writers who had write-ins,  and chatted a lot on forums and on Facebook, and we received almost daily writing encouragement from novelists. This time it was much more of a solo effort and much of my writing has focused on solving plot holes or character development, which is both more challenging and less thrilling than the original spurt of creative energy.

Even so, I’m pretty happy with what I’ve accomplished so far, as my characters continue to surprise and delight me, and most days I don’t know what I’ll be writing until it’s already completed.

One thing I have discovered, though, is seeing that graph and the objective total I need to reach every day has caused me on many occasions to push a little harder. What, only 1200 words today? Come on, you can make it to 1500. You’re below par, keep writing until you reach it. And even though the numbers are ultimately meaningless, challenging myself in this way has brought about some fantastic bits of writing. “Just 200 more words” has sometimes generated a gem.

For now, the biggest question is, can I make it to 50K with a very long, exhausting 4 day weekend ahead?

Stay tuned, and we’ll all find out together! 🙂