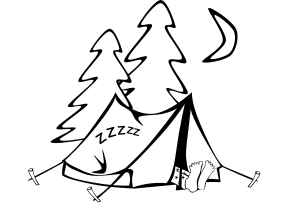 At midnight, I left for camp.

Like the month-long NaNoWriMo novel writing month, Camp is also designed to get people to write every day, though this time things are less structured, and you don’t have to write an actual novel in 30 days. You can also set your own word count goal (the official NaNoWriMo goal is 50,000 words, or 1,667 words each day).

I’ve decided to tackle another 50K with Camp, since I was about to write 71K and change last November. My biggest challenge has been deciding what to write. I’m still in the editing process for my NaNo novel and have been struggling with the climax and resolution. I know where I want it to go, but getting there has been a bit more difficult than I expected.

What I have learned in the editing process is that I don’t really know my characters all that well yet. I thought I did, but not knowing how they would handle a complicated issue only goes to prove that they are still strangers in many ways.

Yesterday, on the very eve of Camp, I finally decided that for Camp what I would do would be write vignettes featuring different characters. Backstory, scenes, maybe even full-on short stories. Any character already named in the novel is fair game. After 30 days and 30 new bits, I should know everyone a bit better.

So at midnight I started with one of my main characters, Simon. While I don’t want to get into details about my story or the characters on the blog, suffice it to say he had a troubled childhood thanks to an abusive father, and now, as a graduate student, he’s trying to come to terms with his past, missing family members, and his father’s legacy. That’s not the plot of my novel, but it is what I’m trying to explore within his character. Last night I wrote a couple scenes from when he was 18, just before and just after he started college. It was really fun, seeing him at a different point in time, and learning a little more about what makes him tick.

I’m not sure yet which character I’ll encounter tonight. I’m kind of thinking I want to hang out with Jake, the protagonist of my short story that inspired this novel, The Pink Suitcase. Although he’s not one of the primary characters in my novel, he does have a significant supporting role.

So that’s the report for today from Camp. I’m sure I’ll write more soon.

(ps this post is #1 in what will hopefully be 30 posts as I take part in my colleague Justin’s writing challenge. Join me! 🙂 )