My book (By Moonrise) is done. The cover is done. All that’s left is a final review of the galleys (the pages as laid out for printing), writing up the acknowledgments, and the back of the cover book blurb.

The ever-so-important summary that is meant to tease and inspire, describing just enough that it piques a buyer’s interest. It’s the text on the back of the book, and the text that glows in neon on Amazon.

You’d think that 150 or so words wouldn’t be that hard to write, especially for someone who writes novels and also is a professional copywriter.

For the past couple of months, I’ve collected phrases and ideas that I thought would work, and compiled them in an Evernote file. I even grabbed a couple blurbs I particularly liked and saved those as well. 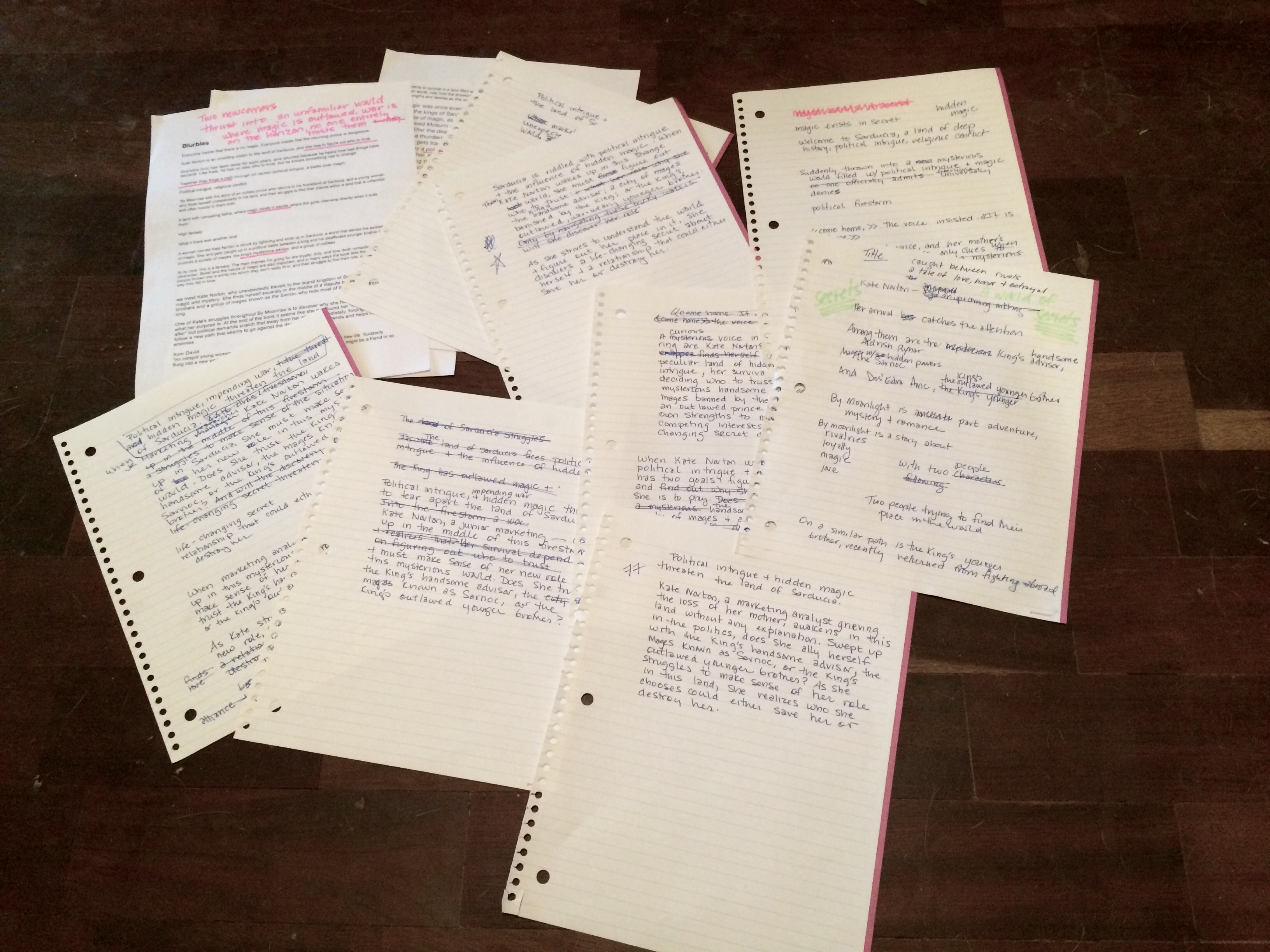 I start working by writing it out longhand, as that’s often more productive for my brainstorming, and tracking changes is a bit easier.

About seven or eight drafts later, I think I have a workable draft. I type it up and then spend a couple of hours editing and revising. I send it to a couple of friends who give me feedback. Then I sleep on it. WIth new feedback, I work on it for a couple more hours, and then crowdsource my “final” version.

And it’s not even close to done yet.

About 10 versions later, I think I have it, but a phrase still bugs one person. And while I like it, I see their point. Another round, more edits. And so on.

Kate Norton isn’t prepared for a debate about magic. All she wants is to keep her job. But when the silver ring she just inherited suddenly drops her into this mysterious, archaic land, her priorities quickly change.

For magic is what lies at the heart of a political rivalry threatening to tear Sarducia apart. Even as Kate tries to figure out why she ended up in Sarducia, she gets pulled into the conflict. Unwilling to be a passive bystander to unfolding events, Kate forges her own path, using instinct to decide who she can trust, and rebuffs those who try to manipulate her.

Driven by loyalty and love, Kate takes dangerous risks with far-reaching consequences. Will her efforts be enough to save herself and her friends?

By Moonrise is a tale of intrigue, mystery and romance.
And one stubborn woman who keeps tripping on the hem of her dress.

To the handful of friends (some of whom are writers themselves) who took the time to read my drafts and offer feedback, I am forever grateful, because 24 hours ago I sincerely was about to give up. I couldn’t have done it without all of their help.

Look for By Moonrise in December 2015.

2 thoughts on “The Agony of Writing a Book Blurb”