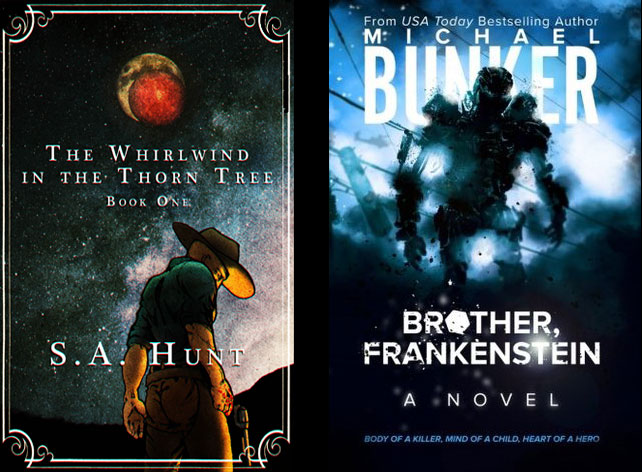 Authors without readers are like house plants without water. While at first they are filled with life and promise, if they go unnoticed long enough, they will wither and fade away.

So it’s important that excellent books get the attention they deserve. Independent authors, who cannot rely on the marketing departments of traditionally-published authors, depend heavily on their readers to help promote their work and grow their careers. A key component of reader promotion comes in the form of book reviews, which play a huge part in selling books and bringing in new readers.

With that in mind, I recently finished two books that I enjoyed very much, and as a challenge, I decided to try reviewing them together. The books are The Whirlwind in the Thorn Tree by S. A. Hunt and Brother, Frankenstein by Michael Bunker.

Hunt’s novel is about a man who is tasked with continuing his novelist-father’s series of fantasy novels set in an alternative western steampunk universe. Bunker’s, on the other hand, features a transformer android with the brain and the heart of an eleven-year-old autistic Amish boy.

And yet, even as I write that paragraph, I can already see how much they have in common.

To start with, both novels feature characters who visit worlds that are both very different from our own, yet oddly enough, share elements in common with each other.

In Whirlwind, we are taken to the world of Destin, which is very much like the old West but with touches of modern technology. In Brother Frankenstein we find ourselves within an Amish community in Ohio, a modern world without technology. As products of an online, high-tech world, both stories’ protagonists therefore struggle to find their way and fit in, and succeed only with help from their comrades. In Ross Brigham’s case in Whirlwind, he has friends who were rabid fans of his father’s books to serve as guides through the strange land; in Brother, Frankenstein, Doc Alexander relies on the child Frank Miller (or at least the brain and heart of the boy now residing within a mechanical body) to help him adapt to the Amish world.

Both authors make unabashed references within their stories to the works that inspired the novels: Ross Brigham muses on Stephen King’s Dark Tower series, and Doc Alexander, naturally, thinks about Mary Shelley’s Frankenstein. Although I haven’t read King’s series, in both cases it seems that the classic works serve only as creative springboards to new tales that transcend their predecessors.

Each book is a first-person narrative, with compelling protagonists who are on the run from unknown malevolent forces: in Ross Brigham’s case, it’s a whole series of terrifying creatures, while in Doc Alexander’s case, it’s a high-ranking federal agent with all of the troops and weaponry he needs at his command. Both of these narrators are flawed, filled with doubts and a bit of resentment for the path that they must follow. They know that many others count on them, and if they fail, those they care about will die. In many ways each book is a tale of survival and struggling against the odds, and although Doc is certainly an anti-hero, you cheer for both to succeed.

Interestingly, at the heart of each novel is an exploration of family and how relationships shape the protagonists’ own personas. On one hand, with his father’s death, Ross has to face up to Ed Brigham’s reputation and the world he seemingly created. By exploring the world of Destin, he learns a great deal about his father and becomes closer to him. Doc, on the other hand, is haunted by a voice in his head belonging to his ex-wife, who scolds and rebuffs him. Then, having given a figurative birth to the HADroid known as Frank, he is forced into becoming a surrogate father for the child-killer robot.

Finally, although neither is technically classified as a “thriller”, both are filled with action and a few twists that keep you turning the pages. Hunt’s book is the first of a series, so there is no grand finale waiting at the end, but there’s an unexpected plot twist that leaves you eager to jump into the next book. Bunker’s book, a stand-alone title, wraps up with a difficult but altogether appropriate ending that wasn’t what I expected.

If you can’t tell, I loved both of these books and would recommend them with equal enthusiasm. As indie authors, Hunt and Bunker are a testament to the fact that there are a lot of excellent independently-published books out there just waiting to be discovered.

So what are you waiting for? Go treat yourself. These new worlds are just a few clicks away on Amazon. 🙂

You can learn more about S. A. Hunt and Michael Bunker at their websites. And while you’re there, be sure to sign up on their mailing lists!

1 thought on “Tales of Androids and Gunslingers”