BrainstormATX: The Little Conference that Could

Austin is the “Live Music Capitol of the World.”

However, I’m convinced we have more writers in this city than we have musicians. The problem is, authors aren’t as visible as musicians, and we tend to be more introverted, so people don’t realize how many writers there actually are in Austin.

Making matters worse, for a city as artsy as Austin, there aren’t a lot of organizations and events for writers that help raise awareness and build community. After many conversations with fellow authors, it became clear we needed to do something about it.

Out of that, a crazy idea came into focus: a local, grassroots writer and author conference.

Austin is full of amazing writers and experts on other topics. It therefore made sense for the conference to be by, for and about our local community. We didn’t need to invite big names or look to other cities for talent.

It also needed to be affordable. Too many writing and publishing events are priced so high that average writers can’t afford to take advantage of them. And we needed to make all writers felt welcome, regardless of experience and choice of publishing platform (if they had even gotten that far).

Out of this inspiration, BrainstormATX was born.

After all of this, BrainstormATX almost didn’t happen. The conference was going to be June 18th, but when May rolled around, almost no tickets were sold, and key volunteers were expressing a lack of time to work on conference planning. As I noted in an article on Medium, it’s very difficult to ask fellow writers and freelancers, all of whom have far too many commitments already, to give up much of their time for conference planning.

Below is our board that showed how many tickets had been sold (the filled in circles), how many we needed to break even (the red line), and how many we could sell in total. As of early May, we had only sold nine tickets. 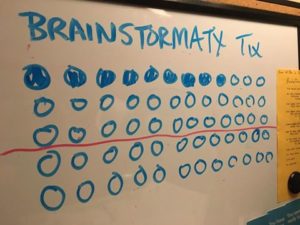 That’s when panic set in. Could we really do this? Honestly, BrainstormATX came within inches of being cancelled. Thankfully, people stepped up to the plate when it mattered the most (thank you Leah and Carol, among others!), and a certain organizer climbed back off the ledge.

Soon the conference cruised right past the “too late to cancel” mark.

The Little Conference that Could

To try to drum up sales, we reached out to all of the authors we knew on social media and via email. We placed Facebook ads. Every local publication received information about BrainstormATX for their events calendars.

And we waited with our fingers crossed.

Slowly but surely, people bought tickets. One at a time, the board started filling up, until we reached the break-even mark. At that point we gained a stretch goal: if we could sell six more tickets, we could get breakfast tacos. Just six more! The six purple circles below the line represented tacos: 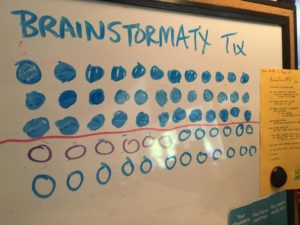 As the deadline to purchase tickets approached, we not only reached our secret stretch goal, but we blew right past it. BrainstormATX sold out every single available ticket.

Hooray! Everything was going perfectly! Now there was nothing could stop the little conference that could!

When I showed up at 7:30am the day of BrainstormATX, volunteer coordinator Laurie greeted me at the door. “I have good news and bad news. The good news is that all of the volunteers are here. The bad news is that the power is out in the whole neighborhood.”

Part of me wanted to panic. No power meant no lights, no refrigeration, no coffee… and no air conditioning.

When life gives you problems, you turn them into opportunities. As attendees started showing up and the power was still out, Michael Bunker saved the day. As the “Amish Sci-fi author,” for 45 minutes he told stories and tall tales about living without electricity. We iced down sodas and sparkling water meant for later in the day. And guess what? Austin writers are damned resilient and patient folks. As hot and sweaty as everyone was, we all stuck it out.

At 9:30am, 15 minutes behind schedule and an hour after Austin Energy told us we should have had power restored, I kicked off the conference with some announcements and a general welcome, and turned it over to Shelley Delayne, the moderator for our first panel.

Just as she began to introduce the first speaker, guess what?

The power came on!

From there, the conference was smooth sailing. We had lots of fascinating presentations from some great speakers, and all of the volunteers were fantastic, pitching in wherever needed. Without hesitation they ran out to buy ice (thank you Tom!) or took out trash or whatever other task needed to be done.

The quality of our speakers was off the charts. There was so much excellent information shared and people seemed to have a blast! Plus we offered attendees three meals and all the coffee, soda and beer anyone could ask for.

As it turned out, losing power was the greatest thing that could have happened. People got to know each other and bond over a shared experience. Even better, who will ever forget a conference where an Amish guy is telling stories in the dark?

BrainstormATX thanks all of our supporters

This conference could not have happened without a small posse of volunteers who stuck it out to the end. Thank you so much to Carol Gunn, Laurie Leiker, Leah Bartlett, Tom Meadows, Susie Meadows, Patti Lioon, Kimarie Bey, Sara Anbari, Densie Webb, Maekala West, Richard Loveland and Raine Teller.

We also had some great sponsors. Thanks to Circle Brewing, Half Price Books, and Carol Gunn.

Most of all, thanks go out to Fibercove Coworking. Co-owner Felicity Maxwell and Ashley worked so hard all day long to make sure we had power, coffee, and everything else that would allow the conference to run smoothly. Without question it was their tenacity and determination that made everything work.

Planning a conference takes a lot of work, and over the next couple of months, we will need to identify a few people who are committed to making it happen. Please reach out to me if you would like to be involved, and we’ll see! 🙂

For now, I’d encourage local folks to join the Write It Already! meetup for writing instruction, support and community, and the Indie Publishing Austin meetup to learn more about publishing. We also have a Facebook group, Indie Authors Unite, for a community of like-minded authors.

One response to “BrainstormATX: The Little Conference that Could”