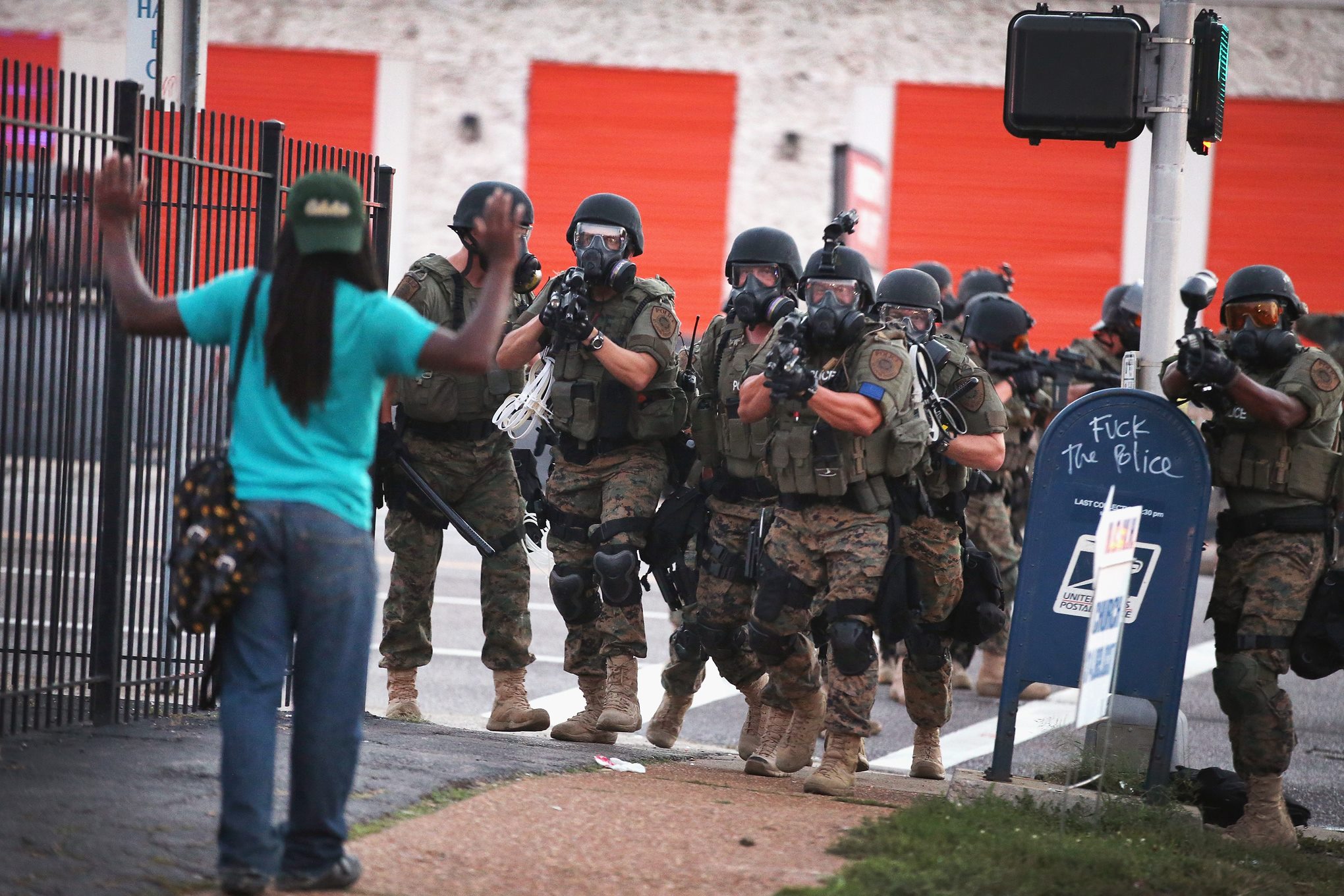 Last Saturday, Aug. 9th, high school senior Michael Brown, an African American, was shot and killed by white police in Ferguson, MO for reasons that remain unclear. Since then, there have been nightly protests and sporadic looting in the St. Louis suburb near the site of the shooting, provoking the Ferguson police to respond with militarized forces including armored vehicles, SWAT teams, tear gas, and rubber bullets. Dozens of people have been injured and terrorized by the massive police response to largely peaceful protests, and citizens, journalists and even a St. Louis Alderman have been arrested for little more than witnessing the violence around them.

For me, this is deeply troubling for more reasons than I can seem to count. Foremost in my head is the fact that I grew up not two miles from where all of the violence is happening. My first eleven years of life were spent on those streets, eating in restaurants along Florissant Avenue, going grocery shopping at the nearby Schnucks. Because it’s the first place I lived, I can remember much of it clearly, and can’t deny a certain nostalgia for the area. I know it’s changed significantly since I lived there – Google Street view showed the apartment complex where my parents and I lived is now an empty weed-filled lot – but that doesn’t alter the fact that this was where I spent my childhood.

In the years since then, I watched as north St. Louis city and county experienced dramatic shifts in racial identity and a subsequent decline in economic growth. Since at least the 1980s there has been little urban development, job opportunity or other elements of growth and prosperity. Even in high school I remember driving down streets lined with empty lots, boarded-up buildings, and few businesses other than fast food restaurants, pawn shops, and other hallmarks of a poverty-stricken area, which stood in stark contrast to the affluent counties to the west, which continued to expand and creep further away from the “inner city”.

Growing up in St. Louis may have been the reason why I focused on studies of race and economic disparity in college, spending considerable time learning about South Africa, India and the American Civil Rights and Black Power movements before finally settling on a study of Northern Ireland for my master’s degree. While I’m white and the fortunate recipient of an excellent high school and college education, the legacy of knowing two versions of St. Louis, one white and one black, meant that I could never erase the existence of social injustice from my mind.

Studying the Irish nationalist struggle against oppression, I learned about the violence meted out by British troops in the north of Ireland. I saw photos of tanks in the city streets, images of the affects of tear gas and rubber bullets (which are the size of a toilet paper tube and can cause serious injuries and death), the stories of protesters and innocents alike being hauled off to jail for the only crime of being poor and Catholic. In the course of my research, I met many people who had experienced the terror of living under army ‘justice’, including those who had gone on hunger strike in prison to be granted basic political rights. The stories of despair and determination will never leave me.

When I watch coverage of Ferguson and see the militarized police moving in against unarmed protesters, I see everything come full circle. The victims aren’t Irish and Catholic; they’re American and black. And 30-40 years later, the exact same tactics are being used against them that were used in Ireland, and before that, during the American Civil Rights Movement. Even the rubber bullets haven’t been retired.

Has society learned nothing in all this time? Are we really reliving the mistakes of the 1960s and 1970s?

It is not surprising that when, oppressed by the machinery of a hostile state that is more interested in protecting property than human rights, people will respond. Initially they stand up in non-violent protest against their oppressors, but as history has shown us, the oppressors always respond with violence and tyranny. Is it any wonder then that people who live in poverty, without opportunities for education or jobs and who live with the possibility crime every day of their lives, will turn to anyone who offers them alternatives? Is this what we want?

As human beings, it must be our collective duty to help those who don’t have the same advantages we do. We must all agree to fight injustice and inequality, particularly when it exists in our own backyards.

Most of all, as Americans, we must acknowledge that racism still is a powerful force in our society, and that efforts to ignore it and pretend that we live in a ‘post-racial society’ are outright dangerous.

For more information on the events in Ferguson:

USA Today has a timeline of events

GA Rep. John Lewis, famous for his involvement in the 1960s civil rights movement and leading SNCC and therefore no stranger to protests, is calling on President Obama to declare martial law in Ferguson.

2 thoughts on “Ferguson: History repeating itself”