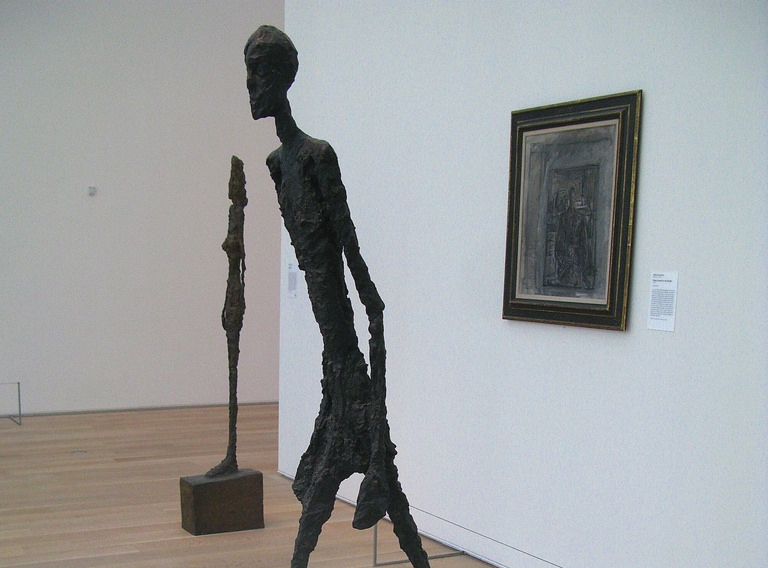 Tonight I attended a writing meetup at the Austin Zen Center.

After a brief meditation we all wrote for 25 minutes on a prompt. One of the participants unwrapped a small metal sculpture. It was an emaciated figure of man (in the style of the sculptor Giacometti as illustrated here), standing with a rat’s nest of wires jutting out from his head at acute angles, like a bunch of triangles. The sculpture made me think of disturbed thoughts or nightmares, and from that, I wrote the following:

Razors and incisors. Her dreams flew so fast she couldn’t grab on to any, but she feared they might catch her if she didn’t contain them.

What was she thinking, inviting such chaos into her life? Chaos fed the nightmare creatures. Chaos—the lack of definition, lack of direction, gave the creatures sustenance. And it was a feeding frenzy now. Thoughts slammed into her consciousness like baseballs at batting practice, but she couldn’t catch any, couldn’t even get a good look at them. They were her fears, her desires, her worries, all given a physical form. They were all flying around like wasps in her head, stinging and retreating. The demonic buzzing of their wings would give her no respite.

As she watched, the dream buzzards, the scavengers of her emotions, settled down on a vast tree with limbs that stretched all the way to the horizon. The tree itself was bare, not a leaf to be found. But the creatures took the place of foliage, lining up on every exposed branch like a tree in full leaf. It was terrifying to see them all arranged there, settling in for the long wait—the wait for her to stumble, to become their next meal.

Then the creatures began to soften, the forms becoming less distinct, their wings melting into the edges of flames, shifting and twisting until the entire tree was ablaze. It burned as a threat; it burned as a warning. It burned until it shifted once again. The outstretched limbs of the tree became the limbs of a person. The cluster of demonic creatures at the top of the tree resolved into a head. And the trunk and roots likewise became a body and legs.

Before her stood a man, but not just any man. He had transformed, but his hair still held traces of the foul wings and teeth of her nightmares.

He slowly brought his arms together, in a gesture intended to embrace her, but she jumped back in time to avoid his touch. She knew who he was and had resolved never to let him touch her again.

“So you can enter my dreams,” she said, knowing he was no specter, no imaginary torture. She knew who he was, and she knew that he was real. “This is how you did, isn’t it? Except most of the time we don’t recognize you—or perhaps you don’t usually show yourself?”

I didn’t plan it when I started, but the idea of nightmares made me think of the novel I’m working on right now, Chasing Mermaids, which is a story about people who can go into each other’s dreams (and was inspired by my short story “The Pink Suitcase“). So in the above piece, the point of view is that of my protagonist Gigi, and the man referenced is the main antagonist, Drew.

Since I read it aloud to a group of strangers, I figured it’s already had its public debut so I’d share it here as well. Someone asked if it would show up in the final novel, and you know, it just might. 🙂